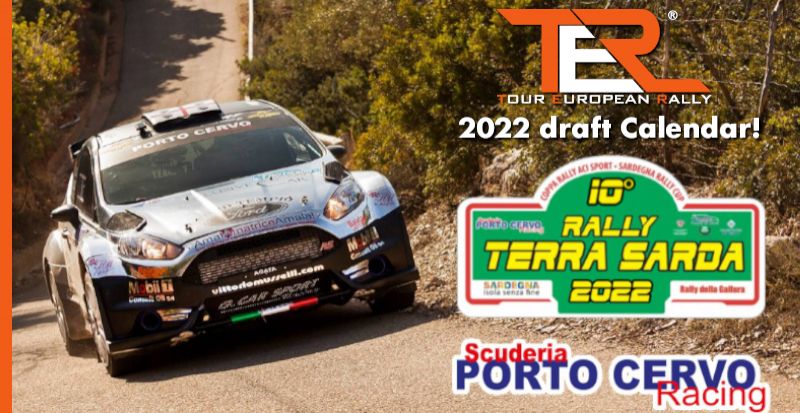 Prestigious Porto Cervo will host the end of season prizegiving.

Halfway through the 2021 season, the TER – Tour European Rally promoters are already working for the seventh edition of the latest concept of Rally series, with great events based in tourist-oriented areas; a perfect blend of sporting action, breathtaking backgrounds and dedicated global promotion.

The latest addition to the 2022 series, with a 3-year agreement, is Rally Terra Sarda, based in the north-eastern part of the beautiful mediterranean island between the Gallura and Ogliastra areas; next year the Rally, very popular amongst both crews and fans, will celebrate its 10th edition by becoming the final event of the TER, TER Historic and eTER.
The capital of the world famous Costa Smeralda area, Porto Cervo, will provide the perfect location for the end of season prizegiving and gala.

The 2022 calendar may also see other events join the series, in a bid to enhance the original TER project of a global coverage to increase the promotion of sporting action in unique locations (The French Riviera, Georgia, Sardinia, Switzerland, Tuscany and… more).

Luca Grilli, TER Promoter and Organiser:
“I am delighted to welcome Rally Terra Sarda in the 2022 TER. I am proud of the fact that our series, based on a perfect blend between the sporting and touristic sides of the events, will feature in 2022 worldwide famous locations such as the French Riviera, Tuscany, the Valais and Vaud regions in Switzerland, and welcome Georgia (gateway between Europe and Asia), the Costa Smeralda, Gallura and Ogliastra areas of Sardinia. The events which are part of our series have a great sporting background and international recognition. This is also thanks to the global TV coverage which the TER provides in over 150 countries worldwide. There is more to come and we will make more announcements later in the season, as we continue to develop the TER concept in unique locations allowing a tailored promotion”.

Mauro Atzei, President of Porto Cervo Racing:
"We are proud to have become part of the Tour European Rally, not only as an important goal achieved by our team, but by all the sportsmen for the promotion of Sardinia. The TER is a great promotion at European level for an event, Rally Terra Sarda, which in recent years has gatherd appreciation by the crews and the many fans, but above all very high marks from the technicians and supervisors. The 2022 edition of Rally Terra Sarda will feature an increased special stage mileage and will embrace a very vast territory, from the Ogliastra to Gallura areas, devoted to major tourist events".